Delhi is said to be the heart of India. Of course it is which stores within itself the past glory of seat of empires & astonishing monuments and rich & diverse culture of true India. Delhi is sprinkled with dazzling gems like magnificent monuments, fascinating museums, art galleries, architectural wonders, fabulous eating places and bustling markets.

Delhi is well connected, by a network of roads and national highways, with all the major cities in India. The three major bus stands in Delhi are Inter State Bus Terminus (ISBT) at Kashmiri Gate, Sarai Kale-Khan Bus Terminus and Anand Vihar Bus Terminus. Both the government and private transport providers provide frequent bus services. One can also avail prepaid and private auto and taxi services here.

Delhi is well connected with domestic and international flights, to all major cities within and outside India. Almost all the major airlines have their flights operating from Indira Gandhi International Airport at New Delhi.

Akshardham is a Hindu temple complex in Delhi, India. Also referred to as Delhi Akshardham or Swaminarayan Akshardham, the complex displays millennia of traditional Indian and Hindu culture, spirituality, and architecture. The building was inspired and moderated by Pramukh Swami Maharaj, the spiritual head of the Bochasanwasi Shri Akshar Purushottam Swaminarayan Sanstha, whose 3,000 volunteers helped 7,000 artisans construct Akshardham.

The temple, which attracts approximately 70 percent of all tourists who visit Delhi, was officially opened on 6 November 2005. It sits on the banks of the Yamuna. 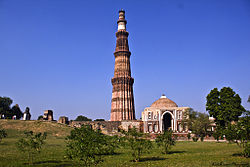 The Qutub Minar is a tower located in Delhi, India. It is the world's tallest brick minaret with a height of 72.5 meters (237.8 ft)[citation needed]. Prithviraj Chauhan built Qutub minar for his daugther to see Yamuna, but later, Construction commenced by Qutb-ud-din Aibak who won Delhi from Prithviraj under Muhammad Ghori as his commander in chief, and finished by Iltutmish[citation needed]. The Qutub Minar is notable for being one of the earliest and most prominent examples of Indo-Islamic architecture. It is surrounded by several other ancient and medieval structures and ruins, collectively known as Qutub complex.Qutab Minar is the nearest station on the Delhi Metro. 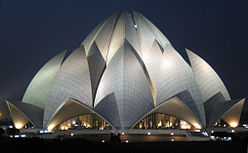 The Bahá'í House of Worship in Delhi, India, popularly known as the Lotus Temple due to its flowerlike shape, is a Bahá'í House of Worship and also a prominent attraction in Delhi. It was completed in 1986 and serves as the Mother Temple of the Indian subcontinent. It has won numerous architectural awards and been featured in hundreds of newspaper and magazine articles. 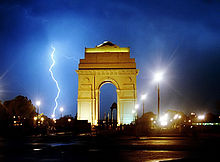 The India Gate is the national monument of India. Situated in the heart of New Delhi, India Gate was designed by Sir Edwin Lutyens, inspired by Arch de Triumph in Paris. It was built in 1931. Originally known as All India War Memorial, it is a prominent landmark in Delhi and commemorates the 90,000 soldiers of the Indian Army who lost their lives while fighting for the Indian Empire, or more correctly the British Raj in World War I and the Third Anglo-Afghan War. It is composed of red and pale sand stone and granite.

Originally, a Statue of King George V had stood under the now-vacant canopy in front of the India Gate, and was removed to Coronation Park with other statues. Following India's independence, India Gate became the site of the Indian Army's Tomb of the Unknown Soldier, known as Amar Jawan Jyoti (The flame of the immortal soldier).

Delhi features an atypical version of the humid subtropical climate (Köppen Cwa). Summers are long and extremely hot, from early April to mid-October, with the monsoon season in between. Early March sees a reversal in the direction of wind, from the north-western direction, to the south-western. These bring the hot waves from Rajasthan, carrying sand and are a characteristic of the Delhi summer. These are called loo. The months of March to May see a time of hot prickling heat. Monsoon arrives at the end of June, bringing some respite from the heat, but increasing humidity at the same time. The brief, mild winter starts in late November and peaks in January and is notorious for its heavy fog.

Famous for its mixture of historic landmarks, monuments, temples and stylish Art Deco style buildings, the city of New Delhi is filled with interest. Amongst the most notable landmarks within New Delhi are the India Gate, the Lotus Temple (Bahai Temple) and also the President House (Rashtrapati Bhavan).

No trip to New Delhi is complete without a photo or two of its famous Red Fort (Lal Qila), which features a stunning red facade and evening light shows. Just across from the Red Fort is the Raj Ghat, an official memorial to India's spiritual leader, Mahatma Gandhi. New Delhi's main monuments and landmarks are described below.